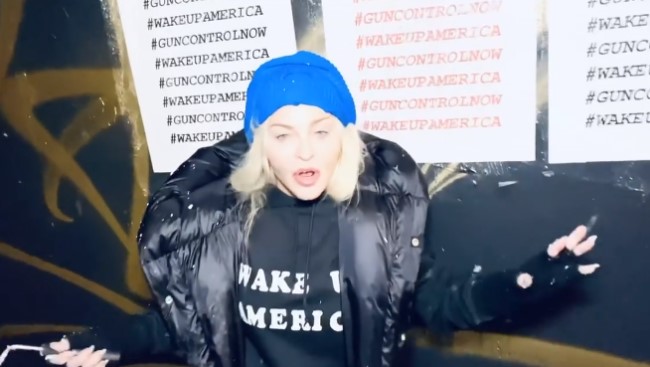 Could someone please call the nursing home? She wandered away again…

Recently, our friends at GunsAmerica reported that noted 1980s-era celebrity Madonna has partnered with anti-gun organization Everytown for Gun Safety to create a video explaining why she (and they) think Americans should give up our guns. If you’re not familiar with the superstar of 40 years ago, allow me to introduce you to Madonna Louise Ciccone. Having pioneered the art of lip-synching and dancing in her underwear–which I assure you was all very shocking in 1984–Madonna is now every bit as qualified to talk about gun safety as the creators of Everytown for Gun Safety. Having established her qualifications to discuss the Second Amendment, let us now turn our attention to Madonna’s activism. As you can see in the below video, this multimillionaire with multiple homes spread across the globe and 24/7 private armed security is quite the guerilla activist. Daringly venturing out into the deep dark night all by herself–armed with nothing but a roller, a puffer jacket, and a few gun-toting bodyguards–Madonna is really putting herself on the line to get her message out! Click the above image to watch grandma’s video. She worked hard on it for weeks, so say “thank you” nicely!

And what is that message, exactly?

Well, whoever operates Madonna’s Instagram for her made that clear with the following quote: “There’s a new Vaccination!! Its called GUN CONTROL! Should be mandatory. It will SAVE LIVES! [sic]”

So, as you can see, Madonna would like you to think of the Second Amendment the same way you do about the COVID-19 virus. Or, more precisely, she would like you to think about it the way she thinks about the COVID-19 virus. And what does she think of COVID? Check out the quality of her face mask. As you can see, it covers everything but her nose and mouth. Therefore, it’s just as useful as Madonna’s political opinions.

Why does Madonna think you can vaccinate an opinion?

As awkward as it may seem to refer to the forcible disarmament of Americans as a “vaccination,” it makes perfect sense to Madonna. “Wait a minute, Trace,” you might be saying, “isn’t Madonna British? Why is a British person commenting on America’s Second Amendment?” As it turns out, Dear Reader, Madonna was only British by vaccination herself. (Clearly her booster shots have expired, as you can tell by the fact that Madonna’s Bronx accent is back.)

“Wake up America,” pants the Italian grandma as she glues up some pre-printed posters. “I made breakfast and you’re too skinny.” No wait, that’s what my Italian grandma used to say.

By the way, Madonna, if you’re reading this? Yes, I still have the book…and no, I didn’t pay for it.