From the Special Forces playbook right to your shooting diary. 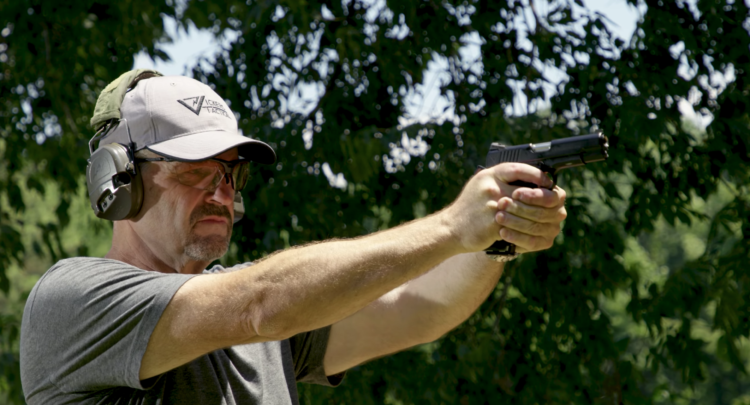 Larry Vickers of Vickers Tactical gets a lot of questions, which is only natural: As a retired US Army 1st SFOD- Delta combat veteran, combat marksmanship instructor, and industry consultant, Vickers offers the kind of battle-tested intel that can be tough for those among us who never had the honor of service to learn. Although his custom handgun and carbine instructional classes are always in high demand, Vickers has some hot self-defense marksmanship tips you can use right now.

For Vickers, the skills to survive a gunfight start and end with accuracy. “Whenever I teach drills, I always tell my students to shoot as fast as they can, but not at the expense of a reasonable accuracy standard,” says Vickers. “One of the techniques I frequently use is to place a 25-yard pistol bullseye center target on the chest area of an IPSC or IDPA target. I then tell the students to shoot as fast as they can on each and every drill, but always strive to keep the shots in the black of the bullseye.”

Explains Vickers, “This is commonly known as the ‘aim small, miss small’ approach. Part way through the first day I will peel off the bullseye and show the students the large ragged hole that inevitably results from this drill. This reinforces the teaching point that speed is fine, but accuracy is final.” Aftermarket magazines are higher quality generally than the standard issue ones. | Image courtesy of CMC Products

“Magazines are the single most critical component of the weapons system,” states Vickers. Although magazines are durable as a rule, abusing them too much during training might set them up to fail you when you need them most.

“Don’t drop them fully loaded during a mag reload drill as that is very abusive and does not reflect reality,” warns Vickers.

He also cautions that, although the original manufacturers’ magazines are usually superior, there are exceptions. “Original 1911 manufacturers as a general rule supply a cheap, low bid magazine with their pistols, as they realize most serious shooters will buy higher quality aftermarket magazines.” Learning how to shoot while on the move will help you be prepared for a real life self defense situation. | Image courtesy of Wikimedia

One critical component to surviving a real-life gunfight is the ability to shoot on the move. What’s tough about that is that the “normal” gait most of us use to move quickly is anathema to accuracy…so we need to learn how to minimize that. Says Vickers, “The most critical aspect to shooting on the move is minimizing vibrations that transfer above the belt line, which in turn affect accuracy. You can’t eliminate vibrations, just dramatically reduce them.”

According to Vickers, the key to reducing that upper-body motion is to make your lower body do its job more effectively—and that means learning to walk before you run. “This is done by laying your feet down in a ‘rolling’ fashion such as heel to toe roll,” advises Vickers, “bringing your feet closer together when walking to mitigate the side-to-side sway many people display, and most importantly making your knees absorb the shock of each step.” You might feel for a few minutes as if you’ve woken up in a Monty Python sketch, but you’ll feel a lot less silly once you’ve seen what your new walk does for your on-the-move accuracy.

Interested in more tips and tricks from Vickers Tactical? Keep an eye on this space…hint, hint.

3 Critters That Millennials Will Hate Soon