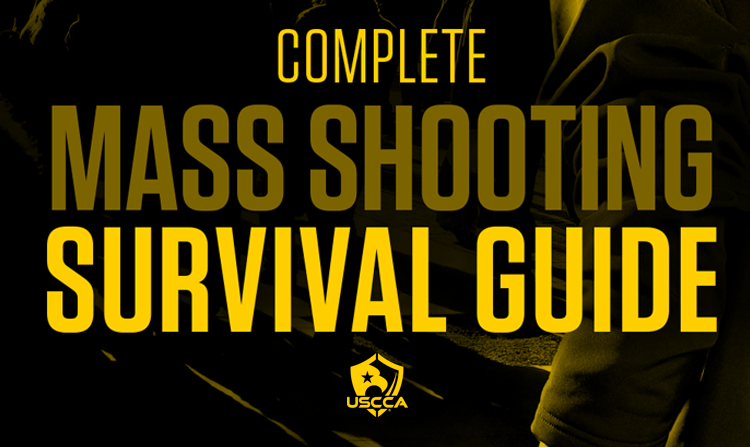 Did you know that the U.S. Concealed Carry Association (USCCA) offers free online education and training to help law-abiding concealed carriers defend against a mass shooting threat? Given that, to date, my can’t-fail method to end mass shootings forever hasn’t been implemented, this may very well be the next best thing. The guide is delivered in .pdf format, and offers practical, evidence-based advice you’ll find far more useful than the anti-gunners’ idea (which, inevitably, involves banning guns).

Although USCCA has offered this free booklet for some time now, recent events have cast a strong light on just how important it is to have law-abiding, well-trained armed citizens on the ground when a mass shooting begins. The recent shootings in Santa Clarita, California, where legally armed citizens are relatively rare, went on until the shooter decided to stop.

Compare that to what happened one day later, when a mass shooter tried the same thing at an Oklahoma Wal-Mart. An armed citizen made him stop. (That, by the way, is why this is probably going to be the last time you read about it. The mainstream media loathes having to mention the fact that armed citizens save lives.)

The Complete Mass Shooting Survival Guide goes far beyond “seek cover and call 911,” with extensive information that looks at the problem from multiple angles. You’ll learn how to spot some of the early warning signs that many mass shooters have, historically, displayed. You’ll learn more about what drives mass shooters, as well as tips for what to do when things have gone Condition Red. There’s interesting information about how and why so-called “Gun-Free Zones” don’t (and can’t) work. Finally, you’ll learn what’s known as “deadly force decision making,” which is essentially a rubric for understanding what your moral and legal responsibilities are in such a situation.

“The recent shootings in Santa Clarita, California, is tragic and heartbreaking. These are our fellow Americans, and we can all agree that something needs to change because this is happening far too often in our communities,” said USCCA President and Founder Tim Schmidt. “But the simple fact is that there is no magic wand, as witnessed by the fact that California already has some of the toughest anti-gun laws in the country. We need to focus on actual solutions and what we know works, which starts with empowering more Americans to be their own responsible protectors.”